The First Annual Los Angeles Times Food  & Wine Festival was held on September 5th at Paramount Studios on Melrose in Hollywood.  I had such a blast. I'm looking forward the the second L.A. Times  Food Festival and so should you !  There were hundreds of people in attendance. The weather was hot but I was prepared; I had my pink back pack and a cap. I gave most of my beverage tickets away because I’m not really a drinker like that anymore. But hey back in the day, I probably would have tried to stand in every line ! There were dozens of booths offering samples of wine and spirits. All in all, I sampled one drink similar to a Mojito from Brazil. It contained strawberries and lime and I also sampled a Merlot.
I also enjoyed eating lavender and honey flavored ice cream! Delicious !   There were food panels, book signings and cooking demonstrations.  While I stood in a long long line to taste some basil lemonade at the Nam Nam food truck, there was a cooking demonstration going on by Roger Mooking. 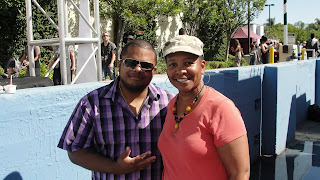 Roger gave the best advice about cooking with and utilizing fresh herbs, which I use a variety of herbs mainly for teas but sometimes for cooking. The problem is I always have a lot of a particular herb left. So Roger suggested that we lay the herbs on a piece of paper or a paper towel and place them on a book shelf and allow them to air dry. Once they’re dry the herbs can be crushed and used to flavor meatballs, meatloaf, baked fish etc. Then here’s the best advice, we can also used the left over sticks of the herbs and place in a bottle of olive oil, and viola ! You have a special flavored olive oil that can be used on salads, used to sauté, etc. 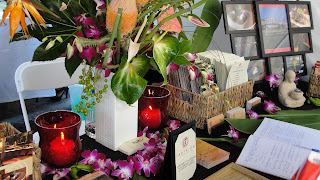 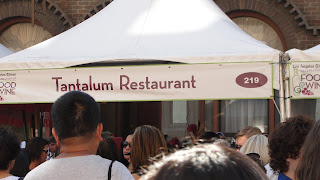 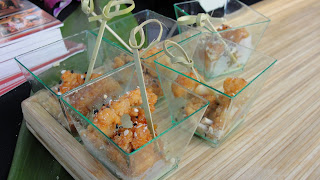 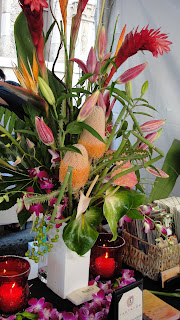 To my surprise, the food booth that received the most compliments and praise was from Long Beach ! Once again as I stood in line and began talking with this woman she mentioned that there’s a restaurant from Long Beach serving some delicious calamari. She couldn’t think of the name but showed me which direction it was located. So I headed over to find out which restaurant she was talking about. It was Tantulum. In fact as I snapped photos of the Tantulum booth, a few more people complimented the Tantulum staff! Long Beach represent !  Wooohoooo ! The booth display was absolutely exquisite and the calamari were tasty! The secret was in the sauce. The name of the sauce that made the calamari so tasty is called yakiniku. It's a Japanese sauce. The aioli , (green sauce) was shishito pepper aioli. and homemade by Tantalum's chef named Jack.  Make sure you order some when you visit. The samples were going so fast I couldn't snap a photo of a whole tray quick enough !  I've been to Tantalum once for a birthday dinner and my experience was memorable. I've heard many good things about Tantalum's Happy Hour as well. So if you're in Long Beach, you must put Tantalum on your agenda. 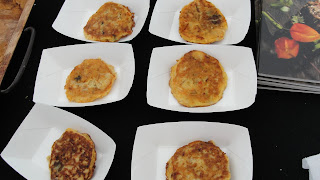 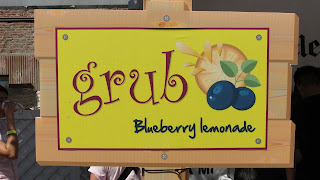 I also had the honor of meeting  Betty Fraser of  Top Chef and owner of  Grub in Hollywood. I had some of Grub's refreshing Blueberry Lemonade which was very much appreciated in the hot weather!  Mmmmm... Mmmmm. Thanks again Betty !

And remember foodies, there's still time to submit a piece to The Culinary Coquette Anthology ( Women Writers On Food) click here for more  info
Share |
Posted by Unknown at 11:33 PM

good points and the details are more precise than elsewhere, thanks.